The QMCA is proud to provide the 10th instalment of the Queensland Major Projects Pipeline Report (QMPPR). Developed in conjunction with BIS Oxford Economics; over the past decade, the QMPPR has become the barometer of current and future major project activity and construction industry conditions in Queensland and is proudly supported by Bennett and Bennett, BMD and ARTC Inland Rail

The QMPPR provides a comprehensive list of major engineering construction projects, together with analysis on the corresponding level of construction activity. Activity is based on both the completion of existing projects and the likelihood of potential projects proceeding.

A complete list of major projects considered for this analysis, and the explicit assumptions for each project regarding work done, and construction workforces employed each year, are provided in this report. Infrastructure provision is critical to maintaining Queensland’s economic health and growing the economy. It’s just as important to maintaining and improving the quality of life for Queenslanders, connecting communities and providing essential services.

The economic benefits of timely and adequate infrastructure provision are well documented.

At the macroeconomic level, the development and delivery of infrastructure provides a welcome boost to employment and economic activity.

But infrastructure investment also has a critical microeconomic role. Through good project selection, investment in economic infrastructure can be a powerful determinant of productivity growth and productive capacity for the Queensland economy in the long term.

Over the past decade, the volatile performance of the major projects market in Queensland, and the broader Queensland economy, can be put down to the impact of large, long cycles of investment, across both the public and private sectors.

The public sector accounts for 52% of the total pipeline (compared to 50% in 2020) but 70% of funded work (compared to 73% in 2020). In this year’s pipeline there is a significant increase in privately funded electricity and mining and heavy industry projects which means the pipeline is slightly less reliant on publicly funded projects than in the past. 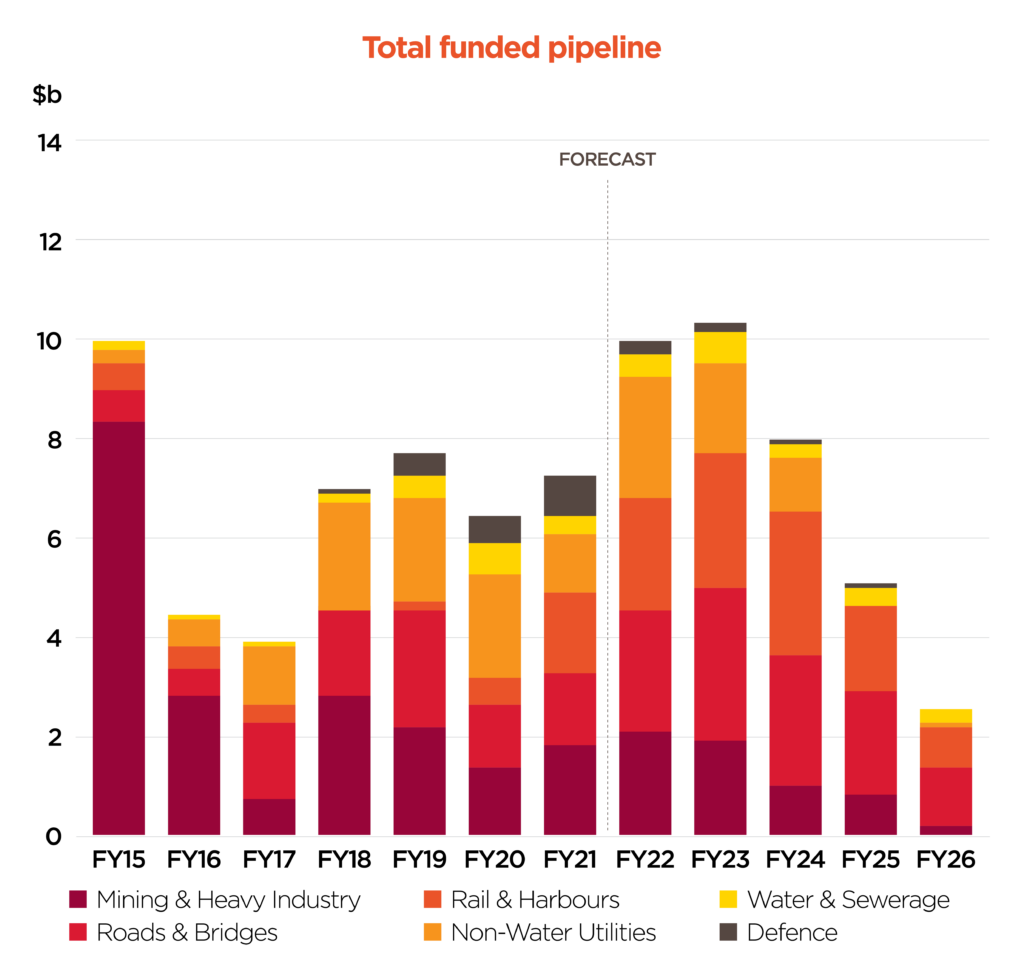 The 2021 QMPPR shows a large cycle in major project activity playing out across the next five years. There are significant upside and downside risks from the ongoing impacts of COVID-19, and the tightening industry capacity and capability.

There is a need to rethink infrastructure targets given relatively strong population growth, hosting the 2032 Olympics, and meeting industry and environmental sustainability goals.

Thank you to our partners Bennett and Bennett, BMD and ARTC Inland Rail for their support of the 2021 Queensland Major Projects Pipeline Report.

BMD Constructions is a wholly owned subsidiary of the BMD Group, and provides civil and industrial construction services to public and private sector organisations throughout Australia. Established in 1979, BMD Constructions strives to be deliberately different in its approach to business with every project being regarded as an opportunity to build long term relationships of mutual benefit.

Bennett + Bennett has been providing advanced Surveying, Town Planning and Spatial solutions for over 50 years.

Established in 1968 on the Gold Coast, we have been privileged to play a significant role in key projects and areas of development legislation which have helped shape South East Queensland.

Our success and longevity within the industry comes from our experience, and ability to work with an outstanding array of clients who continue to put their trust in us. Through collaboration, ongoing improvement, upskilling and technology investment we are able to adapt our services to best meet their changing needs, whilst ensuring we remain current in an evolving market.

Inland Rail is a fast freight backbone that is transforming how goods are moved around Australia, generating opportunities for our regions and our economy, now and well into the future.

Spanning more than 1,700km and comprising 13 individual projects, Inland Rail is the missing link in our national freight network, providing transit times of less than 24 hours for freight trains between Melbourne and Brisbane via regional Queensland, New South Wales and Victoria.

During construction it will create more than 21,500 jobs, including more than 11,800 in Queensland. Work on Inland Rail is well underway, with the Parkes to Narromine section in NSW commissioned in September 2020.

The Australian Government has committed funding for the Australian Rail Track Corporation (ARTC) to build Inland Rail, in partnership with the private sector.